During Witch Ranny’s quest in Elden Ring, she tasks you with finding something known as the “Hidden Treasure of Nocron”. This vaguely named item refers to the Finger Slayer Blade, the key item that Ranny wishes to obtain. Keep in mind that this blade cannot be used as a weapon, as its only purpose is to be exchanged with a witch for an upside down Karian statue.

Where to find Fingerslayer Blade

As the name suggests, the Hidden Treasure is found in Nokron, an underground region below the Graveyard but above the River Spring of Siofra. Therefore, in order to find the Fingerslayer Blade, you must travel to Nocron to retrieve the treasure. However, some adventurers may not know where the Eternal City is or how to get there. Also, after arriving in Nocron, the game doesn’t give a clear indication of where to find the Fingerslayer Blade. Luckily, finding the blade isn’t all that difficult, and the player will even be able to bypass most of the hostile enemies along the way. However, in order for the Eternal City to become available, you must fulfill one important condition.

To get to the Eternal City and get Ranny’s hidden treasure of Nocron in Elden Ring, you must defeat Radan. This mid-game enemy is one of the most difficult bosses in the Interearth, but when you defeat him, you will not only be given Memory and the Greater Rune, but also a whole new region to explore. 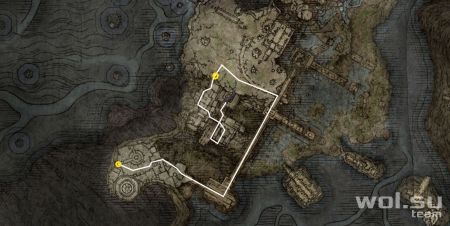 After the scene of Radan’s defeat is shown, a star will fall from the sky and land in the southern Misty Woods. Travel to this area and dive into the crater that leads to Nokron. Upon reaching the first location of Grace, players must fight a mandatory boss to continue down a long overpass that runs across the entire map. After reaching the Place of Grace in the Forest of the Ancestors, you have to go through a short platform stage.

While in the Place of Grace, jump off the cliff onto the rooftop to the south. Keeping the gap in mind, carefully lower yourself onto the ledge below. Go around the corner on the left and jump over to the balcony on the opposite side. Keep moving across the rooftops until you reach two Silver Tears, which will turn into humanoid creatures when the player gets close to them. Slip past them to the left and run through the archway to a structure resembling a chapel. Climb to the second floor and run past the enemies to the front entrance. U-turn at the edge of the cliff and quickly run past the numerous Silver Tears to reach the giant hooded skeleton structure at the end. Inside the building, players will find a chest containing the Fingerslayer Blade.