In Genshin Impact, Eight Places from Mountains to Seas is an event where you play the role of a guide for a familiar furry friend. Your task is to guide Kitiboshi around Teyvat, showing him the sights and capturing the moments.

The event runs for seven days (one day includes two locations), and each day consists of a new adventure along with Kitiboshi. Although the event doesn’t have as many complex mechanics as other in-game events, the mischievous Kitiboshi can be quite a hassle for any intrepid adventurer. Luckily, this guide will tell you everything you need to know to send your little tanuki home with fond memories. 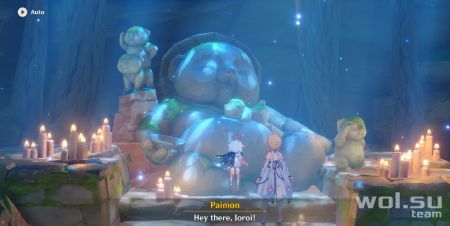 The “Eight Places from Mountains to Seas” event should automatically appear in your Events tab, though you’ll need to have an Adventure Rank of 30 or higher and complete most of Archon Inazuma’s quests to participate. In addition, you must first complete the Bayashi Tanuki in the Forest quest, which will introduce you to Ioroi and the Peki Danuki.

First, the event directs you to speak with Iora, a giant tanuki statue in the heart of the Chinju forest in Inazuma. After some interaction, Ioroi expresses a wish that you take Kitiboshi with you to the continent in the hope that he will receive some training and broaden his horizons. From now on, you can select different daily walks with Kitiboshi on the event page to complete the event. 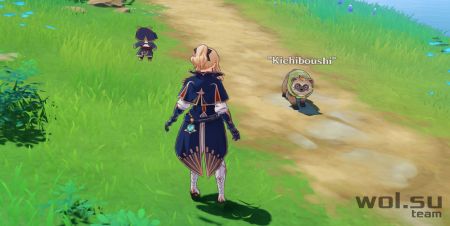 Your outing with Kitiboshi usually consists of helping him or others with various tasks, chasing a curious creature, and taking photos of Kitiboshi at various scenic spots. The quests you’ll be involved in might involve settling disputes between NPCs, cooking for Kitiboshi, or even fighting wild boars.

Tanuki are known in Japanese folklore for their mystical antics, and Kitiboshi is no exception. Sometimes he wants you to play with him, that is, he starts teleporting, and you have to run after him. Usually, Kitiboshi performs a small dance at a new location, giving you an auditory and visual cue of where to go. 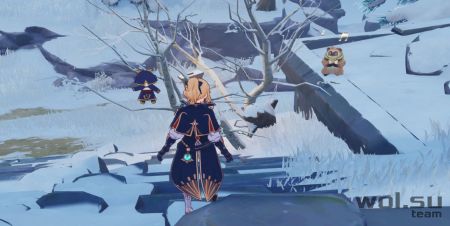 Tanuki also have the ability to shapeshift, which Kitiboshi sometimes uses while playing. Finding him after such transformations can be difficult, but focus on finding objects that you can interact with, such as torches. Attacking these objects or triggering elemental reactions may be the key to finding him. In one of these early examples, it turns into a torch near the bridge, which you will need to light.

Your adventures with Kitiboshi often culminate in a souvenir photo session. By interacting with your problematic companion (no, not Paimon) in these places, you will use the game’s camera interface and be able to take a screenshot, which you can optionally save to your computer.

Rewards for the event “Eight places from mountains to seas” 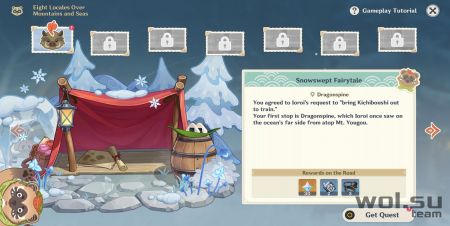 Upon completing each part of the event, players will receive several Source Stones, Talent Leveling Materials, and Weapons.

These materials are usually purchased with resin, so this event is a convenient way to get them for free. Don’t forget to get rewards every day on the event page.