In LEGO Star Wars: The Skywalker Saga, there is a Sith scientist on Exegol who has difficulty dealing with five defective Snoke clones that are on the loose and are causing trouble for the Citadel in the game. To help the Sith scientist, players will need to hunt down each clone, but they all have different fighting styles to adjust to. By defeating all five defective Snoke clones, you can purchase the Sith Acolyte for 35,000 parts.

Exegol must be unlocked before starting the Attack of the Clones side mission (again). The only way to unlock Exegol in free play is to complete all story missions for The Force Awakens, The Last Jedi, and The Rise of Skywalker. When Exegol is unlocked, the Snoke’s Patrol side quest will be available in the southernmost area of ​​the in-game map. Snoke’s Patrol will need to be completed first before Attack of the Clones becomes available (again).

The first side mission involves escorting a stranded pilot out of the Sith Citadel while fighting off waves of Snoke clones. After getting the pilot out, players can use the elevator to return to the Citadel. Immediately behind the cloner in the first part of the Sith Citadel, there will now be a Sith scientist with a side quest. A Dark Side character will need to speak with a Sith scientist to start a side quest.

How to defeat the defective Snoke clones on Exegol in LEGO Star Wars: The Skywalker Saga 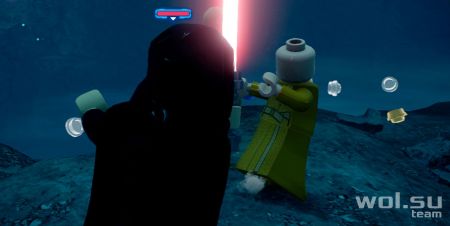 Mission markers will lead to search locations for Snoke’s clones, and players will need to find and defeat them. Snoke clones can be found by following their voices, but they each have their own fighting style. When the clone is defeated, it will fall to the ground, after which players can move on to the next one. The droid Snoke is the first clone to fight, and the fight with him is quite simple. The droid Snoke uses only fist attacks, so any LEGO Star Wars: The Skywalker Saga character can defeat him, but he is best handled by lightsaber users.

The intelligent Snoke has a cane, but he uses it like a lightsaber, so the second fight is reminiscent of many of the story’s boss fights. Ranged weapons only deal one damage per hit, even if headshots are used, so melee attacks are the only way to defeat the intelligent Snoke. After you knock out this clone, you can find Speedy Snoke nearby. The third clone will run instead of fight, so players need to keep chasing him, dealing damage until his health is depleted. At the beginning of the chase, a smoke bomb will be thrown, which will give the clone an advantage. In LEGO Star Wars: The Skywalker Saga, Speed ​​Snoke can be hit by both ranged weapons and melee attacks, but gains a small amount of immunity after each hit.

The fourth clone, Rear Snoke, fights a baguette that acts like a lightsaber. It deflects bolts, so it will require melee attacks to defeat it. Snoke strikes often, dealing significant damage in a small radius, but the rest of the fight should be familiar. After defeating Snoke, you can take the elevator to the surface to find the last defective clone.

Funky Snoke is the hardest to defeat because he often disappears in clouds of smoke. If any LEGO Star Wars: The Skywalker Saga character gets too close to Funky Snoke, they will become immune to damage and fly away. For this clone, you need to use ranged attacks from a distance to deplete his health. Headshots will end the fight faster, after which a prompt will appear that will return the player to the Sith Scholar. Talking to the Sith Scientist will complete the side quest and unlock the Sith Acolyte as a playable character in LEGO Star Wars: The Skywalker Saga.