Vampire Survivors has a new character. In fact, there are two new characters, but in this article we will only talk about one of them – Cosmo Pavone. This character continues the trend of introducing non-humanoid characters into the game; this time, instead of a dog, a tree, a demonic meatball or a dragon shrimp, there is a phoenix.

This character gets generous starting bonuses and can carry more weapons than most characters. Cosmo Pavone also gets a few hidden bonuses. This high-flying character can become one of the strongest in the game with the right build.

How to unlock Cosmo Pavone character 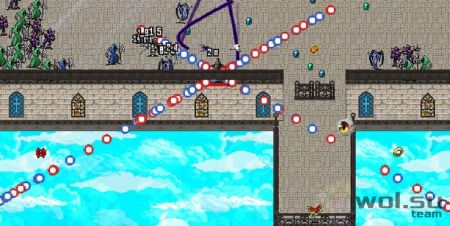 Like almost all characters in the Vampire Survivors game, Cosmo Pavone will take some work to unlock. Fortunately, unlocking Cosmo Pavone is not as difficult as many other characters. First, the player needs to select a character who has not received a single golden egg. This includes eggs obtained from the merchant, as well as those obtained from killing the Masked Guardians, Moon Guardian and Death. Simply disabling egg bonuses on character selection does not circumvent this requirement.

The player can find out if a character has received an egg by selecting it on the character selection screen. In this case, the character’s statistics will be displayed in the window on the left. At the bottom of this window is the counter of golden eggs for this character. Next, select the Cappella Magna stage; it does not matter which options the player turns on or off – for example, Hyper mode. The player should now obtain Ebony Wings and Peachone weapons during gameplay. After obtaining these two weapons, the player must head north.

How to play Cosmo Pavone 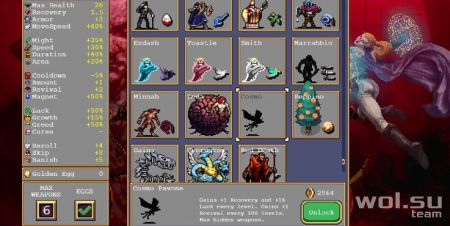 Cosmo Pavone starts with -80 Max Health, +30% Movement Speed, +1 Recovery, +20% Luck, and one extra Respawn. As if that weren’t enough, Cosmo Pavone gains an additional respawn every 100 levels (thus one extra respawn), as well as +1 cooldown and +1% luck each level. By the end of the game, with the right choice of passive items, Cosmo Pavone can heal quickly.

At the start of the game, this character has two hidden weapons, Ebony Wings and Peachone. They start at level one and increase by one level for every ten levels Cosmo Pavone gains. You can have two sets of Ebony Wings and Peachone. Finally, when Cosmo Pavone casts Revive, he is also affected by the effect of the Rosary item. Due to this effect of the Rosary and the fact that Cosmo Pavone starts with a low max health, it is recommended to pick the “Sarabande of Healing” arcane. Rosary’s effect increases with each respawn; to the point where he can kill enemies that would normally not be affected by Rosary.