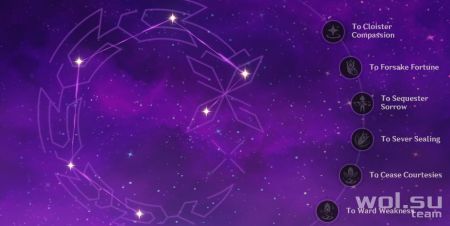 The constellations of Kuki Shinobu are short and cute, there is nothing incomprehensible in them, which is very useful for the players, since all their actions are simple and clear. Because they are so simple, players will have no trouble understanding them. Here are all these levels and their action:

AoE Rite of Gyoei Narukami Kariyama (Kuki Shinobu’s Elemental Explosion) is increased by 50%. This is a nice buff that will just allow more enemies that are in range of her Elemental Burst to take damage and use Electro attacks on them.

Increases the level of your Holy Ring for 3 seconds. It just gives the skill more healing and more damage.

When normal, charged, or sinking attacks of a character affected by Shinobu’s Grass Ring of Consecration hit enemies, Thunder Grass Mark lands on the opponent’s position and inflicts an AoE Electro DMG based on 9.7% of Kouki Shinobu’s max health. This helps teams get more bursts of damage from Electro and increases the team’s overall damage.

When Kouki Shinobu receives a lethal DMG, that instance of the DMG will not remove it. This effect will automatically trigger when her health reaches 1, and will trigger once every 60 seconds. When Shinobu’s health falls below 25%, she gains 150 Elemental Mastery for 15 seconds. This effect occurs every 60 seconds. This Constellation is very similar to Hu Tao’s C6 in that lethal damage will not clear it once per minute. Shinobu will also greatly benefit from the Elemental Mastery buff she gets from this because it will give her Elemental Mastery more healing and more damage in Genshin Impact.