The Black Knives Armor in Elden Ring is a set of armor identical to the Black Knives Killer worn by players in the Undead Catacombs and Sage’s Cave. The outfit has a dark and sinister design, and the armor is wrapped in a veil that looks like an ethereal one. The Black Knives Armor Set is the perfect piece of equipment for those who play Elden Ring as an assassin or bandit. The location of the armor set is easy to find, and the equipment is acquired without much effort. However, in order to get the armor, you will have to go through a significant part of the map.

In order to get the Black Knives armor set in Elden Ring, you must travel to the Giants’ Mountain Peaks, a region in the far north of Interearth. After passing through Storm Veil Castle, you must cross Liurnia and the Altus Plateau. However, the Altus Plateau can only be accessed after players activate the Dectus Elevator by collecting the two halves of the Dectus Medallion. Once players have made their way through the massive royal capital of Leindell, they will be able to travel to Rold’s elevator.

Rold’s large elevator will allow players to access the east side of the Giants’ Mountains in Elden Ring. However, the left side will remain inaccessible until you get another medallion, similar to the one required for the Dectus elevator. In particular, Haligtree’s secret medallion is used to control Rold’s Grand Elevator in such a way that it allows access to a hidden path leading to the Consecrated Snowfield. From here, players will be able to travel northwest to the city of Ordina and find the Black Knives Armor Set.

Where to find the Black Knives armor set in Elden Ring 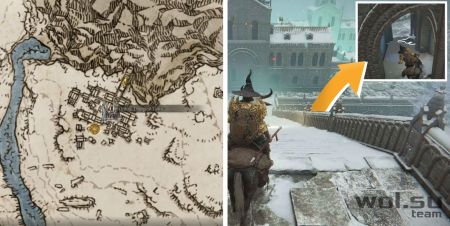 The secret medallion of Haligtri consists of two halves, each of which is hidden in separate regions. The left side of the medallion can be obtained from Sol Castle, located in the northeast of the Giants’ Mountains. To get this item, players must defeat the boss on the roof of the castle.

The other half of Haligtri’s secret medallion is hidden in a little-known location in the southwest of Liurnia. Albus, an NPC disguised as a pot, will be sitting at the end of the path leading up the hill, near the Albinauric Village. Hit him once to remove his disguise and he will give the player the right side of the medallion. Return to the elevator and head north to Ordina. Under the long staircase leading down to the city, the player will find a set of black knives on a corpse.