Collecting gold in Vampire Survivors is not an important part of the game. This was before the advent of the Golden Eggs. These eggs can be purchased from the merchant to provide a small, permanent, cumulative boost to one of the character’s many attributes.

These eggs cost 10,000 gold each. Many veteran players had a supply of gold coins that Scrooge McDuck would envy, a supply that quickly emptied when buying eggs for a favorite character. The newest character in Vampire Survivors, Big Trouser, has one goal – to help the player recover their gold reserves.

How to unlock the Big Trouser character 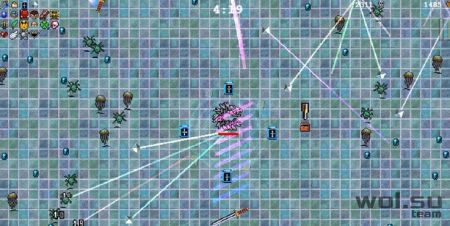 To unlock this character, the player must obtain all 16 Moonglow stage items. These items are the base passive items in the game, formerly known as accessories. In addition to obtaining all of these items, the player must bring them all to the maximum level (level 5). These items can be leveled up when the character gains a level. In this regard, the player is advised to choose a character with a bonus to growth (experience) in order to speed up this process a little. Imelda Belpaese and Gains Boros are the only characters that provide a growth bonus; Gains Boros growth bonus is higher than others.

After the player has brought the number of items on the stage to the maximum level, he needs to exit the stage and complete the run. This is due to the fact that if the player waits until the end, Death will appear at the 15 minute mark in the Moonglow stage. If Death kills the player, it will remove one level from Tiragisu’s passive item, causing the player to be unable to complete the requirements. After leaving the stage, the player must return to the character selection screen, where he can purchase Big Trouser for 5,000 gold. The price increases slightly for each character the player has already unlocked.

How to play Big Trouser 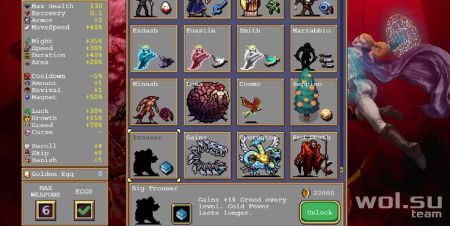 Big Trouser – An exact copy of the merchant that the player encounters at the beginning of the stage if they have unlocked the merchant. This character’s passive bonuses are +1% greed per level, no max, and an increase in Gold Rush duration. Big Trouser’s starting weapon is the Candybox; this weapon gives the player the ability to instantly select any base weapon in the game that the character does not already own. Unlocking the Big Trouser will also unlock the Candybox; this makes it possible for other characters to gain it when they level up.

It goes without saying that when using the Big Trouser, the player should receive the Stone Mask passive item. This item further increases Big Trouser’s Greed rating. This makes the Inlaid Library a good stage to play when you go looking for gold with the Big Trouser, because the Stone Mask is one of the stage items. The Bone Zone is also a good stage due to the fact that only gold coins and gold bags drop from the light sources. The Disco of Gold Arcana is a good choice for Big Trouser because he triggers Gold Rush when a bag of coins is picked up. Lastly, use the Big Trouser in Hyper mode as this mode also increases the amount of gold collected.