In Vampire Survivors, O’Sole Meeo is a new dog character that scatters flowers as it moves. Flowers are projectiles for Celestial Dusting, which is the starter for O’Sole Meeo. Celestial Dusting is not very effective – except against bosses, where it becomes very useful. Using O’Sole Meeo is made more difficult by the fact that he doesn’t gain any passive bonuses until he reaches level 20.

This character’s weapon gains one more projectile every 20 levels, up to a maximum of +3 projectiles at level 60. This bonus makes the bullet build optimal for O’Sole Meeo. This build also pairs well with Gennaro, Mortaccio, Cavallo, and Bianca as they all share the same passive bonus as O’Sole Meeo. 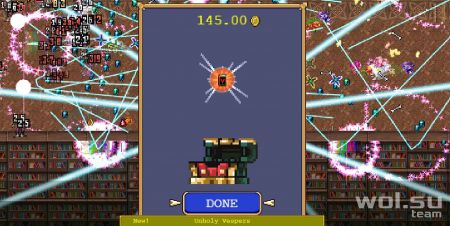 The best build for O’Sole Meeo contains as many weapons as possible, which are affected by his passive bonus. The goal is to fill the entire screen with projectiles. The weapons in this build are as follows:

Get the King Bible as soon as possible; its usefulness decreases once the rest of the weapons are fully leveled. Cross should be chosen after opening the weapon slot by combining the last two weapons in Phieraggi. When this weapon is fully upgraded, enemies will not even be able to get close to O’Sole Meeo. If the player gets a choice of Bone or Cherry Bomb, choose them; they should replace Magic Wand or Cross. Don’t count on getting Bone or Cherry Bomb as options, as the chances of them being offered are extremely low. 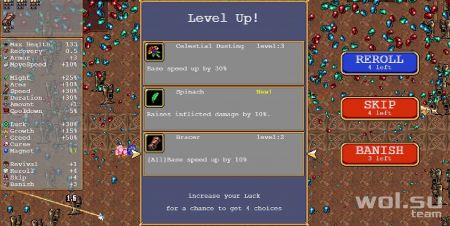 This assembly uses the following accessories:

All these accessories are very important for this build. Armor is needed exclusively for the development of Runetracer. The Empty Tome and Spellbinder build on the Magic Wand and King Bible, but these two accessories make Phieraggi’s weapons incredibly powerful. Tiragisu is needed to create Phieraggi, and additional revives would be nice too. The Duplicator, when fully leveled up, will add +5 extra projectiles per weapon to O’Sole Meeo’s extra projectiles. Bracer increases the projectile speed of O’Sole Meeo, making them much more effective in terms of DPS. 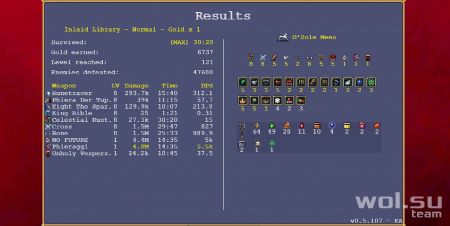 Here’s a tip for players who find it difficult to get O’Sole Meeo past the 30-minute mark: Players can type “pet” while playing to summon healing hearts. This can only be done once per game, so use it wisely. Plant enemies in Il Molise’s bonus stage cannot harm O’Sole Meeo, and her Celestial Dusting starter weapon does not harm plant enemies (it actually heals them). This was done because the plant enemies don’t move and the Celestial Dusting projectiles travel backwards.