The new Il Molise stage in Vampire Survivors requires a new build type. This stage differs significantly from the other stages due to the enemies that players will have to face. Enemies at this stage are mostly plants, so they don’t move. This means that in Il Molise the player has to walk towards the enemies, while in other stages the enemies attack the character in an attempt to overpower him.

So far, there are two notable build types for this stage: Bullet Hell build using weapons like Runetracer and Magic Wand, and this build using weapons like Lightning Ring and Santa Water. This type is designed to endlessly walk left or right, while killing all enemies that the character passes by without taking any damage. This physique allows you to score a huge number of kills.

How to pass the Il Molise level 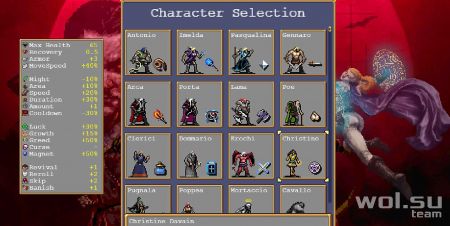 There are several characters the player can choose for this build: Christine, Lama, Poe, and Poppea. Christine starts with one of the main weapons for this build, has a reduced weapon reload time and a faster movement speed. Lama eventually becomes as fast as Christine, and gains an increase in power (damage). 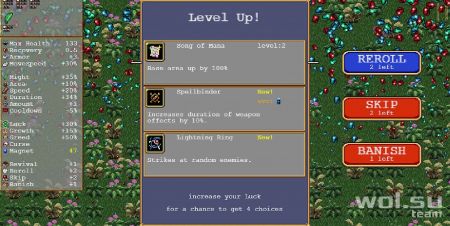 Song of Mana fires a column of energy vertically to the top and bottom of the screen. This pillar also pierces enemies, so every enemy that hits the pillar will take damage.

The task of this weapon is to bring it to such a state that it constantly shoots. This will allow the player to endlessly walk right or left and kill every enemy that passes through a pillar that stays in the center of the character as they move. When used correctly, the result will look like the one shown at the top of the article; there should be no enemies behind the player. 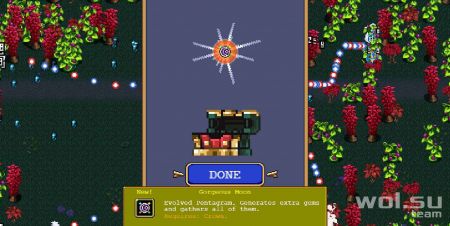 The Pentagram was not a very good weapon until it received an improved version. Yes, she kills all the enemies on the screen, but in doing so, she destroys all experience gems and even treasure chests until she reaches the highest levels. The upgraded version not only does not destroy experience gems, but also acts as a vacuum collection item and pulls them towards the characters.

In this build, this is the only weapon that absolutely needs to evolve. In the last couple of minutes, the screen fills up with jars of coins. When they are destroyed, instead of precious stones, a gold coin drops out. The upgraded Pentagram – Gorgeous Moon, breaks all of these cans and pulls the gold towards the character, making this build a great option for collecting a lot of gold. 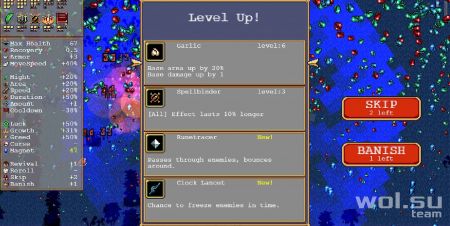 Garlic requires the player to run straight into enemy lines. This can be deadly. The best defensive item for this physique is the Garlic Weapon. This weapon creates a barrier around the player that deals damage to enemies. The damage isn’t that great, but Garlic also pushes enemies back. This repulsion usually creates enough space to get through.

As Mana Song levels up, Garlic will start to play a smaller role in this build; he’s here to protect the character and make it easier to level up in the first few minutes. Don’t worry about Garlic’s evolution; there are better accessories than Pummarola, and Il Molise has fewer treasure chests than other stages. 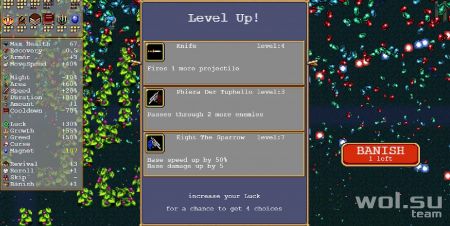 The Knife is considered one of the worst weapons in Vampire Survivors. However, its fast rate of fire in whatever direction the character is pointed makes it perfect for this build. The Knife is great for clearing a path as the player walks, and this build is designed to keep walking in one direction endlessly.

Upgrading Knife to Thousand Edge makes this build even better; however, the player will want to leave Knife at level 7 until Pentagram evolves – she takes precedence. The Bracer is used to upgrade the Knife, and this trinket does not upgrade any of the other primary weapons. 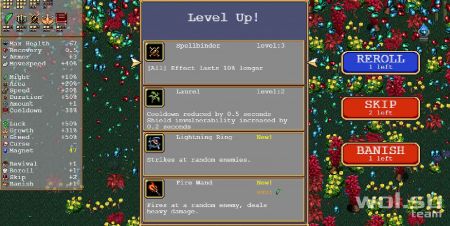 The best way to get the duration of Song of Mana to exceed its curtailment time is to pick up the Spellbinder trinket when it becomes available, or play as Poppea or Christine. Even if these two characters are chosen, the player must still receive a Spellbinder if offered.

The King Bible is a great secondary weapon for this set. She works with Garlic to create a two-layer barrier. With the mid-level Song of Mana, Garlic and King Bible, the character will be able to pass through groups of enemies unscathed. As with Knife, keep King Bible at level seven until Pentagram is developed. 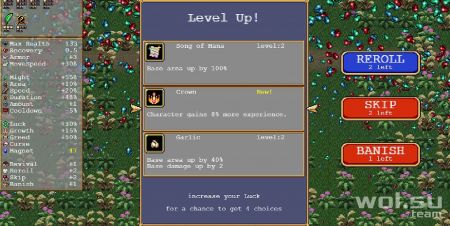 Crown increases experience gained from experience gems dropped by enemies. The crown is the main accessory in this build for two reasons. The first reason is that Crown is developing Pentagram. Gorgeous Moon will make it easier to level up and help you collect a ton of gold in the last five minutes.

The second reason is that this stage only lasts fifteen minutes, unlike the other stages which last thirty minutes. Players will need an XP bonus if they want to get all of their weapons and accessories to max level. Get the Crown early to get the maximum bonus. 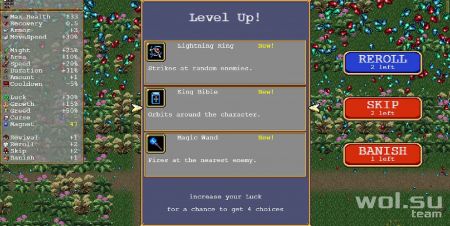 Players should avoid weapons that fire slow projectiles or projectiles with irregular flight paths, such as the Fire Wand and Cross. Laurel is useful in the first minutes of the stage, but after reaching the maximum level, Song of Mana becomes a waste of a weapon slot.

Phiera Der Tuphello and Sparrow the Eight weapons work well with this build. The only problem with choosing these two weapons is that the player may not have enough time to bring both of them to the eighth level and merge into Phieraggi. However, Phieraggi is one of the best weapons in the game and works even better with this build. In addition, the respawn from the Tiragisu accessory required to combine these two weapons is not required in the Il Molise stage. 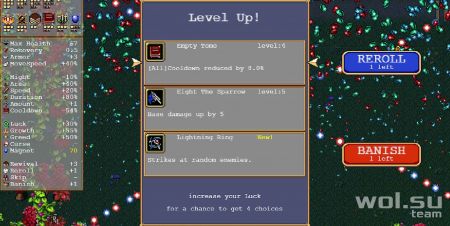 Attractorb is not essential for this build – it just makes the game much easier. At level five, Attractorb will collect almost all experience gems when the character walks left or right. If a player is aiming for a record number of kills, he should purchase Wings. At max level, all primary weapons deal enough damage that even super-fast characters like Red Death can kill all enemies in their path.

Spinach is another reasonable secondary accessory. Thanks to him, Garlic will not become too weak to quickly kill enemies, which will prevent the character from taking damage. Empty Tome is another good choice. 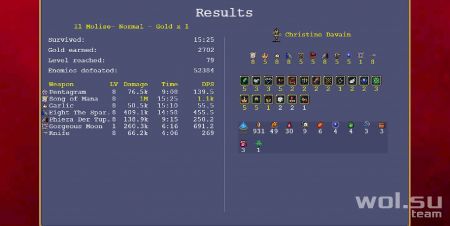 If the player chooses Christine and does not get Garlic or Song of Mana as a free level choice, discard and start over. This stage is too short to waste time on a weapon like the Fire Wand as a starting weapon. If you want to get a high number of kills, the player should purchase the Skull O’Maniac to increase the number of enemies on the screen.

If the player adds the Clock Lancet as a secondary weapon, Death can be killed by constantly stepping left or right. Just remember to remember whether the character must pass above or below Death when passing so that the Clock Lancet does not allow Death to freeze. If the Clock Lancet is chosen to attempt to kill Death, the player will also need Laurel, Tiragisu, and the purchased Revive.