In TMNT: Shredder’s Revenge, players can collect three crystal shards scattered across 16 levels. Crystal Shards are the power source for the Neutrino hovercraft. Neutrinos are humanoid aliens that first appeared in the 1987 television series in the episode “Alien Teenagers from Dimension X” and are one of the many cameos included in the game. In addition to crystal shards, players can find Punk Frogs, Secret Diaries, Classic Titles, Abominable Bugs, and VHS Tapes to complete the collection and complete the game in 100%. TMNT: Shredder’s Revenge has a variety of Easter eggs that fans of all ages will love.

Three Crystal Shards are hidden in the Foot Crates at levels 11, 13 and 15. In each location, find these boxes and destroy them to open and collect a Crystal Shard. When players find all three Crystal Shards, they will be able to get 200 points to help them level up their characters.

Where to Find All Crystal Shards in TMNT: Shredder’s Revenge 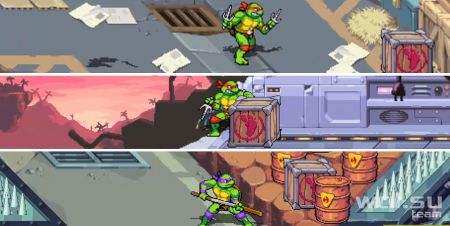 The first Crystal Shard can be found at level 11, where you will fight Captain Zorax in the Museum of Natural History. Inside the museum is a warehouse; downstairs, after defeating some green Triceratons, look for a chest with the seal of the Foot Clan on the right side of the warehouse before exiting. Destroy the crate to get the first crystal shard.

The second Crystal Shard can be found at level 13, where you will fight General Thraag and Chromedome at the Technodrome. The Crystal Shard is found at the end of the level after defeating General Traag. After a few foot soldiers and lasers, a large gap will appear on the floor of the Technodrome. Through the gap are two crates at the bottom of the screen and one at the top of the screen. Break the crate at the top to reveal the second crystal shard.

The third crystal shard can be found at level 15, where you will fight the Krang and the Shredder. The Crystal Shard is the only hidden object in this level and the final collectible. It can be found in a Foot crate surrounded by explosive barrels after clearing the spiked floor section of the level.

In order to complete the game in 100%, players need to find all collectibles such as newspapers throughout TMNT: Shredder’s Revenge. Once you’ve found all the Crystal Shards, return to the world map, travel to Dimension X and return them to Neutrino.